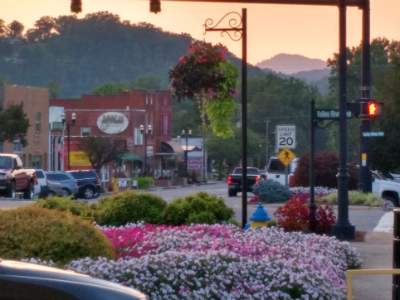 Murphy is a town in and the county seat of Cherokee County, North Carolina, United States. It is situated at the confluence of the Hiwassee and Valley rivers. It is the westernmost county seat in the state of North Carolina, approximately 360 miles (580 km) from the state capital in Raleigh. The population of Murphy was 1,627 at the 2010 census.

The site of Murphy, along the Hiwassee River, was known to the Cherokee as Tlanusi-yi (the Leech Place), because of a legend about a giant leech named Tlanusi that lived in the river there.

The Trading Path (later called the "Unicoi Turnpike") passed by the future site of Murphy, connecting the Cherokee lands east of the mountains with the "Overhill Towns" of Tennessee.

The town was first called by the name of "Huntington" in the 1820s through the 1830s, when the first post office, operated by Col. Archibald Russell Spence Hunter was established. He was also the first white settler to build a frame house in the Cherokee Territory, later Cherokee County.

In 1836, during the Cherokee removal known as the Trail of Tears, the United States army built Fort Butler in what is today Murphy. Fort Butler acted as the main collection point for Cherokee east of the mountains. From Fort Butler the Cherokee were taken over the mountains on the Unicoi Turnpike to the main internment camps at Fort Cass (today Charleston, Tennessee). Today the Unicoi Turnpike is known as the Joe Brown Highway. Fort Butler is no longer a structure, but the site can be visited with historical markers to read. The Cherokee County Historical Museum located in Murphy provides information about the Trail of Tears.

Cherokee County was formed in 1839 from a portion of Macon County, but Murphy wasn't incorporated as the county seat until 1851.

Murphy was once the terminus of the two train lines. The Mineral Bluff, GA spur line (L&N Railroad) came out of North GA and the Murphy Branch (Southern Railroad) came from Asheville. The L&N line was removed in the mid 1980s. The tracks for the Murphy Branch remain but are inoperable. It has been idle since the mid 1990s when the Great Smoky Mountain Railroad discontinued service between Murphy and Andrews. The L&N Depot remains as a community center just southwest of downtown Murphy. Murphy was the home of the once well-known crafts manufacturer Margaret Studios, which operated a nationwide chain of gift stores for its woodcraft products and housewares, such as lazy Susans and gift trays.

Folklorist John Jacob Niles based his well-known Christmas song "I Wonder as I Wander" on a phrase he heard in a song sung by the young daughter of a group of traveling evangelists in downtown Murphy on July 16, 1933.

Architect James Baldwin designed the Cherokee County Courthouse, located in downtown Murphy, in a Beaux-Arts style. Built in 1927, it is faced with locally sourced blue marble and is listed in the National Register of Historic Places along with the Robert Lafayette Cooper House and Harshaw Chapel and Cemetery.