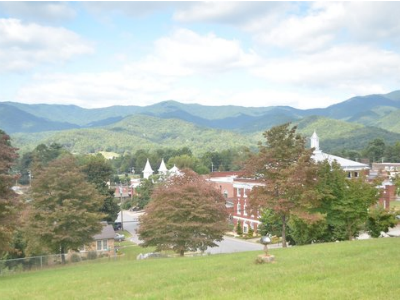 Andrews was known as Jamesville as early pioneers settled in the early 1800s until an Indian Trading Post was established and the community became known as “Valley Town" in 1837. Much like fellow southern towns, Andrews was established through a land auction. Nearly 50 years later, Col. Alexander Boyd (A.B.) Andrews, the second vice-president for Richmond & Danville Railroad, was sent to the area. His objective was to establish a commissary for workers in the Nantahala construction camps. The railroad was completed in the Spring of 1890, along with the original depot. The construction of the town renamed in honor of Colonel Andrews would soon follow.

In 1861 Cherokee County raised 1,100 men for the Confederate Army as the state seceded from the union. In 1865 Kirk's Raiders burned the County Courthouse in Murphy (the first of four courthouse fires between 1865 and 1926). The present Courthouse, now over 80 years old, is constructed of solid masonry and blue marble quarried from the county. Following the Civil War, in 1888, the way of life changed for the better with the introduction of the railroad.

In 1922, the first paved highway opened from Cherokee County to the Georgia line and the Asheville to Murphy highway opened in 1926. The Hiwassee, Valley, and Nottely Rivers and their tributaries provided an abundant supply of water for residents. The Tennessee Valley Authority (TVA) was able to harness the power of the rivers in Cherokee County with construction of the Hiwassee Dam in 1936. Two years later, the lights came on in nearly every home, barn, and store throughout the mountains of Cherokee County.

Over 3,000 people lived in the area when Cherokee County was formed in 1839. By 1860, the population had grown to over 9,000 and today's population is over 27,000. Our county is blessed with many families who have spent generations in our community, as well as many who have moved to Cherokee County in search of the mountain views, moderate weather, and natural beauty.