What's Not to "Luv"? An Interview with Vera Confer of Luv N Mountain Soap by Vera

“As a person who struggled in high school chemistry and college chemistry I’m amazed that I like all this stuff,” says Vera Confer, owner of Luv N Mountain Soap by Vera, suiting herself up with mad scientist laboratory gloves, “biker chick” bandana, safety goggles, and ventilation mask. She jokes about her outfit, but emphasizes how each component contributes to “best safety practices” that can’t be minimized or ignored.

Walking into Vera’s home-based production shop was like walking onto the set of a fine home cooking show. There was a station arranged with safety gear for our discussion on the hazards of lye; the cooking station, pre-staged with pots with oil, and bowls with butters, cups with pre-measured ingredients; a lye bath heating up, the temperature of which she monitored; and a finishing station where an already cured slab of soap would be unveiled at the end of our abbreviated soap making demonstration. 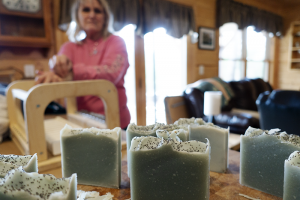 One of Vera's popular soaps, Mountain Hippie, is known for it's "mountain peaks" and "razor stubble."

Showing off her temperature controlled, well organized inventory closet, she adds “I don’t know if it’s a myth but I honor it. Some people feel you have to keep your essential oils away from anything that might give it a bad vibe. So cleaning products, and things like that I keep my essential oils away from any food item or cleaning product because I don’t want them to have that vibe. I want them to keep their own little vibe going.”

Confer, holding a BA in Elementary Education, an MA in Public Administration, and a PhD in Education Administration says lightly of herself, “I guess you can say I know how to teach.” While her outfit might amuse some of her former colleagues and students, her love of learning - and teaching is a common thread weaving its way through her new career.

Retired - but far from tired

“No good soaper can be a good soaper unless they have the ones that don’t work,” she says pointing to a honeycomb/buttermilk soap that didn’t meet her high expectations. 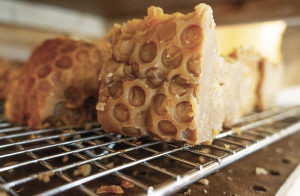 Although she started making soaps just a few years ago, she speaks like a seasoned, but very humble professional.

“What’s wrong with it?” I asked, my untrained eye was really digging the raw look of the comb.

“It’s a little too sticky … you could use it and it would be safe. But if you’re going to buy soap from me, I want it to be as perfect as it can be. I want it to be pretty, make you feel good, and make you smell good.”

When Vera Confer moved to the Smoky Mountains in western North Carolina, she was retiring from a career in education - but she didn’t want to retire from life. She figured she’d downshift to something simple but still productive, perhaps working part-time at Rachel Elise’s store, Blue Moon Elise. Blue Moon Elise is a local store specializing in products, classes and instruction to improve mind, body and spirit. And Vera says it was Rachel’s soap making class that inspired her and further motivated her to take a week long class at John C Campbell’s Folk School.

Getting Lost in Soap Making and Taking Care of Business

“Gosh, you really want to hear me talk about this … I can get lost in this stuff,” Confer laughs as we conclude the interview with a comment about the challenges and joys of being a business owner, starting a new chapter in her life, and her love of soap making. 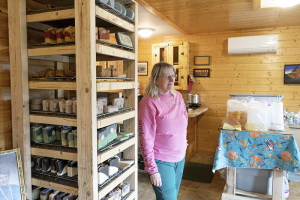 Vera Confer stands by an assortment of her soaps

Handmaking soap is a labor of love. People who are drawn to it tend to have a few commonalities: love for the craft, a curiosity that inspires experimentation, an awareness of the quality of handmade products, and often an interest that to varying extents, is economically motivated.

In other words, soap makers, like any other artist, crafter … or worker, want to make money like anybody else. No shame in that.

She recognized that if she wanted to grow as a business she needed to avail herself of local resources which included joining the Cherokee County Chamber of Commerce.

“Well worth the money because of the support you’re given,” she says, adding that her experience with the Chamber has “exceeded her expectations.”

Vera encourages ones who have moved to the mountains but are still itching to be productive, who maybe have unrequited ambitions to seek out the resources and “go ahead - live your dream.”

What’s not to Luv about that!

A boutique soapery featuring different collections of handcrafted soaps. There is the taste of Florida Collection the Mountain Collection and there is a collection for him with more masculine tones in the soaps. Each collection features unique scents in skin loving soap. In addition to the men's collection, we have skin and hair follicle nourishing beard oils. Moisturizing lotions can be found as well including a nail butter that loves to nurture misbehaving cuticles.

Check out her business directory listing!